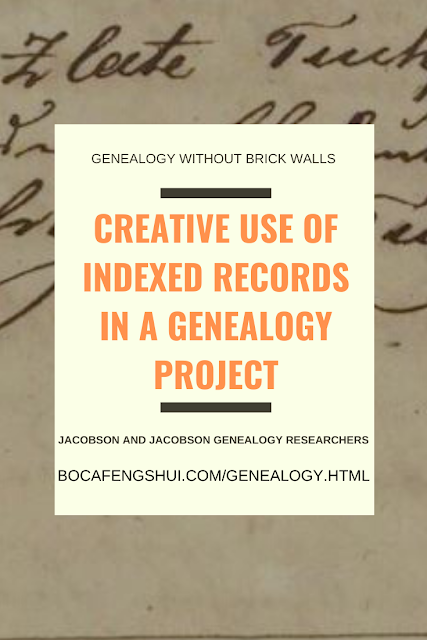 Tuchfelds appear in records of Galician towns other than Rzeszow. In order to prove that all Tuchfelds are connected, we decided to examine indexed records of Tuchfelds in other Galician towns. We quickly stumbled upon two Tuchfeld records in the town of Tarnow. Tarnow is about 55 miles from Rzeszow.

The Tarnow Tuchfeld records that we found included an 1848 marriage record for Zlate Tuchfeld, from Rzeszow, to Israel Lieber Frisch, and the 1849 birth record for their daughter Judes. The 1848 marriage record showed Zlate’s age as 19, calculated birth year 1829. This birth year predates known Rzeszow birth records. We checked Rzeszow records for Zlate and her husband and could not find them. The marriage record included an important clue for Zlate, it named her parents. Zlate’s parents were recorded as Jacob and Frommet Tuchfeld. Upon examination, we discovered that we had already come across and collected information on this couple, unaware that they were a couple. We had previously documented the death records for both a Jacob and Frimed Tuchfeld living in the same house in Rzeszow. Jacob Tuchfeld died in 1857 in house 147 at age 65. Frimed Tuchfeld died in 1859 in house 147 at age 75. The combination of Zlate’s marriage record, naming Jacob and Frommet Tuchfeld of Rzeszow as her parents, plus a Jacob and Frimed Tuchfeld (who were of age to be Zlate’s parents) dying in the same house in Rzeszow, leads us to believe that the Jacob an Frimed in the Rzeszow death records were married and were Zlate’s parents.

Since we couldn’t find Zlate, Israel Lieber or Judes in any additional Tarnow or Rzeszow records, we searched all indexed Galician records. We were unable to find the family in any of these records. We wondered if they had left Galicia after the birth of their daughter. We then examined previously discovered and collected Tuchfeld passenger manifests. Even though Zlate and Israel Lieber were legally married, we thought it was possible that they might have been listed in a Tuchfeld record. We uncovered an 1860 Hamburg departure manifest (in our collection of Tuchfeld manifests) for a 28-year-old Slate Tuchfeld and 8-year-old Judita, both listed as born in Rzeszow. We checked indexed Rzeszow births to see if we had missed a Slate/Zlate Tuchfeld giving birth to a Judita/Judes around 1850, but found none. The combination of the similar names, ages and place of birth for Slate/Zlate lead us to believe that this manifest is likely for Zlate Tuchfeld Frisch and Judes Frisch. The ship’s ultimate destination was recorded as New York, but we were unable to find a New York arrival passenger manifest. We were also unable to find a manifest for Israel Lieber Frisch, or any evidence that anyone in the family lived or died in the United States. We will continue to search for the family. 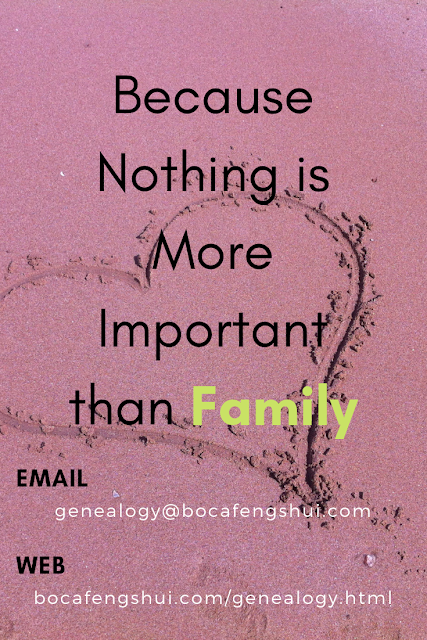 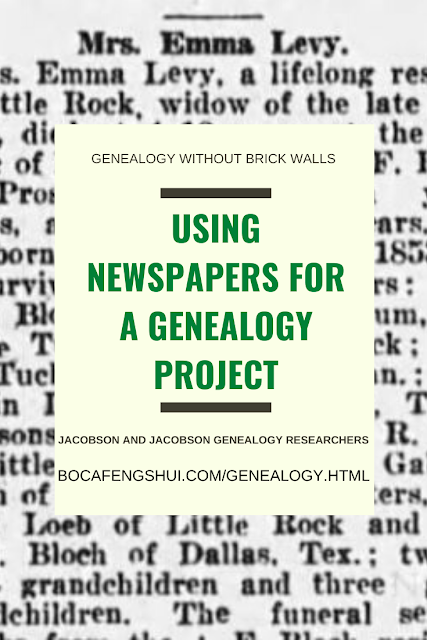 Previously, we traced a branch of Tuchfelds from Rzeszow to Tennessee. In our last blog post, Using Wills and City Directories for a Genealogy Project, we mentioned Joseph son of Salomon Tuchfeld. According to his birth record, Joseph Tuchfeld was born in Przemsyl, Galicia in 1865 as Joel Tuchfeld. His passenger manifest states that Joel Tuchfeld arrived in New York in 1881. While researching Joel, who used the name Joseph/ Joe in the US and eventually moved to Jackson, Tennessee, we found his marriage.

So now we know the connection between the Tuchfeld men, but what about the Levy women? Are they related? Arkansas marriage records from this era did not list parents’ names. Unfortunately, there are limited vital records (birth, marriage, death) for Arkansas in this time period. Census records were not helpful. So, we searched for an alternate source of information. We searched through online newspapers to solve our mystery and confirmed our suspicion that Raye and Grace Levy were sisters. We found the 1922 obituary for Emma Levy, recorded as mother of Mrs. Grace (Levy) Tuchfeld of Little Rock and Mrs. (Raye Levy) Joe Tuchfeld of Jackson, Tennessee.

Sometimes answers to genealogy mysteries are not found in traditional record sources. Creative research can be the answer.

Posted by Leslie Jacobson and Mark Jacobson at 9:00 AM No comments: 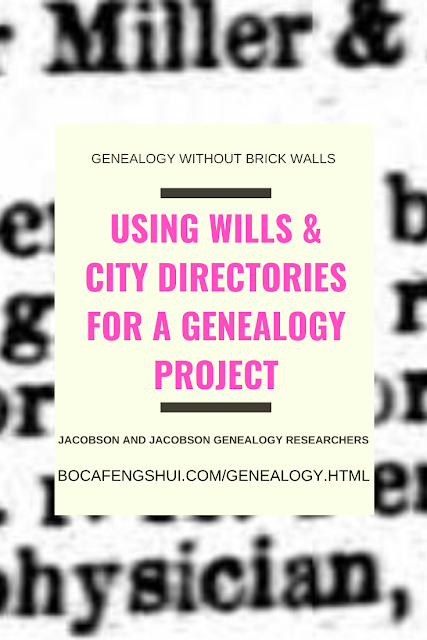 In our last blog post, Using Passenger Manifests for a Genealogy Project, we followed Samuel Tuchfeld from Rzeszow to New York where he interacts with other Tuchfelds. Now we will follow another Tuchfeld from Rzeszow. Salomon Tuchfeld was born in Rzeszow in 1843, according to his birth record. In the 1860’s he moved to Przemysl, where his second son was born. On September 25, 1870, Salomon Tuchfeld departs the port of Hamburg, Germany for America.

Unlike Samuel Tuchfeld, who arrived and settled in New York City, Salomon Tuchfeld headed south after arrival. According to Salomon Tuchfeld’s 1874 city directory listing, he was living in New Orleans, Louisiana and working as a glazier.


In 1900 Salomon is living in Jackson, Tennessee and his occupation is recorded in the US Census as merchant. In 1904 Salomon Tuchfeld is listed in the Jackson, Tennessee city directory as the owner of Sol Tuchfeld & Sons – “dry goods, clothings, shoes, and gents' furnishings”.  There are a total of five Tuchfelds listed in this directory, including Sol’s sons Aaron and Joseph and Sol’s daughter Claudia. The fifth Tuchfeld is Moses Tuchfeld. Further research into Moses Tuchfeld revealed that he is ten years older than Salomon. We found Moses living in Jackson, Tennessee as early as 1876, before Salomon arrived in Jackson. We were unable to find their familial connection, but wonder if Moses was the reason for Salomon leaving Louisiana and moving to Tennessee. A further connection between Moses and Salomon’s family was found in Moses Tuchfeld’s will. Moses named Salomon’s son Aaron as trustee and Joseph as successor trustee in his will. Unfortunately, Moses Tuchfeld did not state his relationship to Aaron and Joseph in the will.


There is evidence of a connection between Salomon Tuchfeld, of Rzeszow and Moses Tuchfeld, born in Austria. The nature of this connection remains unclear.

Posted by Leslie Jacobson and Mark Jacobson at 9:00 AM No comments: 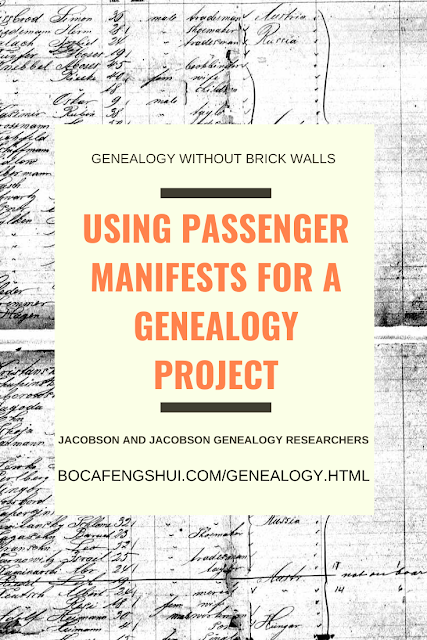 We started this stage of the project by searching for Tuchfeld passenger arrival manifests. We searched Ancestry for Tuchfelds arriving in NY from 1820 to 1957. The Tuchfelds range from 1880 to 1952.

According to his 1880 NY arrival manifest, 22-year-old Samuel Tuchfeld from Austria was an upholsterer. Early manifests do not have a lot of information and can be challenging. Unlike manifests from the early 20th century, they usually do not list a specific town of origin, or name a relative the traveler is going to or leaving behind. Luckily, the Samuel Tuchfeld on the manifest has an unusual occupation for a Tuchfeld from Rzeszow. 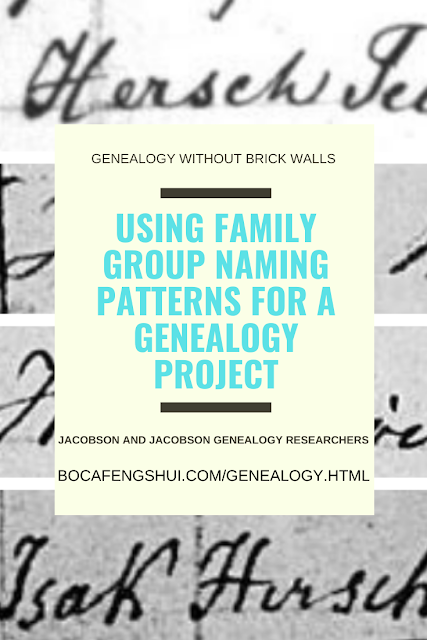 In our most recent blog post, “Using Naming Patterns for a Genealogy Project,” we attempted to connect Tuchfeld families in Rzeszow based on naming patterns. We checked to see if children were named for possible ancestors who had recently died. In the blog post previous, “Using House Numbers for a Genealogy Project,” we charted Tuchfeld house numbers in Rzeszow to look for family connections. We found evidence that hinted at connections but we needed more evidence.

We decided to study Rzeszow’s Tuchfeld family units in a comparative way. Focusing on our direct line ancestors, we compared them to other Tuchfeld lines having children in Rzeszow at the same time, looking for similar names. These families had house number connections and naming pattern connections to our direct ancestor Naftali Tuchfeld, noted in our previous research.

Jacobson and Jacobson Genealogy Researchers  http://www.bocafengshui.com/genealogy.html  helping you grow your family tree.
Posted by Leslie Jacobson and Mark Jacobson at 9:00 AM No comments: 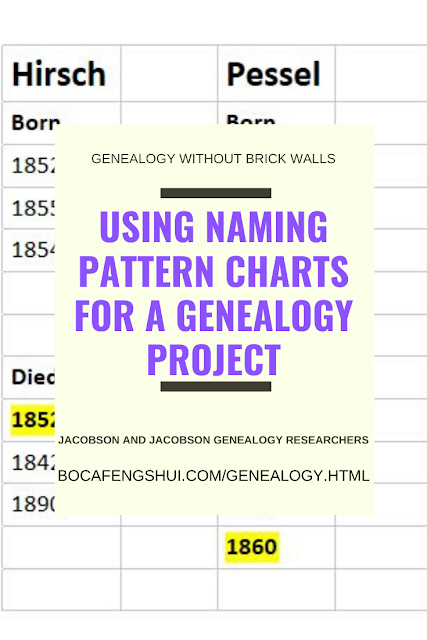 So how do we connect these elder Tuchfelds to each other, no less to the later generations of Tuchfelds? Let’s look at the clues in the records. In our last blog post we connected families using house numbers. But the records also give us other information. The records give us names. In addition to surnames, most records include given names. With first names, we can theorize naming patterns based on Ashkenazi Jewish naming tradition. In Ashkenazi Jewish naming tradition, children are not named for living relatives. They are most often named for deceased grandparents or other close adult relatives who have died. Comparing the lists of deaths to the lists of births, we were able to postulate some relationships.

We found that certain given names repeat over and over again in the family. We focused on the most popular Tuchfeld names in Rzeszow. We created a chart listing those first names and the years of birth and death for the Rzeszow Tuchfelds who held the name. Using this chart, we tried to see if we could find any connection between the deaths and those being given the names. Many were unclear, but some clarified direct relationships.

Jacobson and Jacobson Genealogy Researchers are a brother/sister partnership who lives in Boca Raton, Florida. Our training in research techniques and more than 20 years of practical experience doing genealogy research have prepared us to help you with your genealogy quest. We believe that genealogical research can help reunite long lost family and keep alive the memory of our ancestors. Nothing is more important than family.